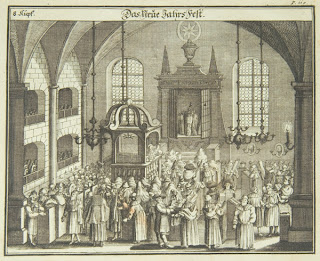 Horns, honey-dipped apples, and some rest -- does it get any better than that?  Tonight Rosh Hashanah, the Jewish New Year, begins.  While it does not seem to have taken on its current name or some of its traditional meanings until the Rabbinic period, it has roots in the Hebrew Bible and 2nd Temple Judaism when it was sometimes called "the Day of Memorial" or "the Feast of Trumpets."  These names were drawn from the Torah, where the Israelites are commanded to observe a memorial day of rest and sacrifice that is proclaimed with trumpet blasts:

“And the LORD said to Moses, ‘Say to the people of Israel, In the seventh month, on the first day of the month, you shall observe a day of solemn rest, a memorial proclaimed with blast of trumpets, a holy convocation. You shall do no laborious work; and you shall present an offering by fire to the LORD.’” (Lev 23:23-25; see also Numbers 29:1-6 for another description of the festival and Nehemiah 8 for the reading of the Law on the first of the seventh month)

What exactly is supposed to be remembered isn't stated in the text, and in the ancient Jewish tradition we find a variety of things that come to be associated with the day.  This includes the giving of the Law on Sinai, peace, Abraham's calling, the draining of the waters from the Flood, God's judgment, and creation.  Below are a few of the texts that mention the first day of the seventh month in the 2nd Temple period.

The Jewish philosopher Philo identified two different elements of this "feast of trumpets," a Jewish national significance and a common, universal significance.  The practice of sounding trumpets was intended to recall the trumpet blast at Sinai, a significance peculiar to the Jewish nation (though the reach and implications of the law was not constrained to them alone).  It's universal significance is based on the trumpets' use as an instrument of warfare, which is meant to remind people that God is the giver of peace in the human and non-human realms.

"THE EIGHTH FESTIVAL: Immediately after comes the festival of the sacred moon; in which it is the custom to play the trumpet in the temple at the same moment that the sacrifices are offered. From which practice this is called the true feast of trumpets, and there are two reasons for it, one peculiar to the nation, and the other common to all mankind. Peculiar to the nation, as being a commemoration of that most marvellous, wonderful, and miraculous event that took place when the holy oracles of the law were given; for then the voice of a trumpet sounded from heaven, which it is natural to suppose reached to the very extremities of the universe, so that so wondrous a sound attracted all who were present, making them consider, as it is probable, that such mighty events were signs betokening some great things to be accomplished. And what more great or more beneficial thing could come to men than laws affecting the whole race?And what was common to all mankind was this: the trumpet is the instrument of war, sounding both when commanding the charge and the retreat. ... There is also another kind of war, ordained of God, when nature is at variance with itself, its different parts attacking one another. And by both these kinds of war the things on earth are injured. They are injured by the enemies, by the cutting down of trees, and by conflagrations; and also by natural injuries, such as droughts, heavy rains, lightning from heaven, snow and cold; the usual harmony of the seasons of the year being transformed into a want of all concord. On this account it is that the law has given this festival the name of a warlike instrument, in order to show the proper gratitude to God as the giver of peace, who has abolished all seditions in cities, and in all parts of the universe, and has produced plenty and prosperity, not allowing a single spark that could tend to the destruction of the crops to be kindled into flame. (Philo, The Special Laws, 2:188-192)


Pseudo-Philo's retelling of the biblical story also mentions this feast.  It's reference to offering sacrifices for the watchers is interesting, as the watchers are angelic beings.  Here we also see the first example of this day being associated with God's judgment, something that will become more common in later Jewish tradition.

“Now the feast of trumpets will be an offering for your watchers. In as much as I watched over creation, may you also be mindful of all the earth. At the beginning of those days, when you present yourselves, I will declare the number of those who are to die and who are to be born.” (Biblical Antiquities 13:6; OTP)

Jubilees, the 2nd century BCE retelling of Genesis, identifies the first day of the seventh month as one of four days that commemorate the Flood and divide the seasons:

Later the same book tells us about an event in Abram's life that precedes his famous Genesis 12 calling:


“. . . Abram sat up during the night on the first of the seventh month, so that he might observe the stars from evening until daybreak so that he might see what the nature of the year would be with respect to rain. And he was sitting alone and making observations; and a word came into his heart, saying, ‘All of the signs of the stars and the signs of the sun and the moon are all in the hand of the LORD. Why am I seeking? If he desires, he will make it rain morning and evening, and if he desires he will not send (it) down; and everything is in his hand.’ And he prayed on that night, saying: ‘My God, the Most High God, you alone are God to me. And you created everything, and everything which is was the work of your hands, and you and your kingdom I have chosen. Save me from the hands of evil spirits which rule over the thought of the heart of man, and do not let them lead me astray from following you, O my God; and let us not go astray henceforth and forever.” (12:16-20; OTP)

Stökl Ben Ezra, Daniel.  The Impact of Yom Kippur on Early Christianity: The Day of Atonement from Second Temple Judaism to the Fifth Century, 207-213.