Tonight the Jewish holiday Sukkot, also known as the Feast of Booths or Tabernacles begins.  It is a rich and wonderful holiday that has its origins in the first temple period, and is one of the three pilgrimage festivals prescribed in the Torah: 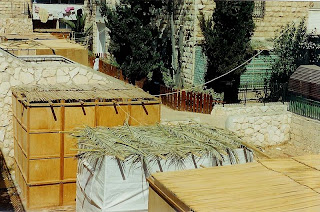 And the LORD spoke to Moses, saying, “Speak to the people of Israel, saying, On the fifteenth day of this seventh month and for seven days is the Feast of Booths to the LORD.  On the first day shall be a holy convocation; you shall not do any ordinary work. For seven days you shall present food offerings to the LORD. On the eighth day you shall hold a holy convocation and present a food offering to the LORD. It is a solemn assembly; you shall not do any ordinary work. . . . . . On the fifteenth day of the seventh month, when you have gathered in the produce of the land, you shall celebrate the feast of the LORD seven days. On the first day shall be a solemn rest, and on the eighth day shall be a solemn rest.  And you shall take on the first day the fruit of splendid trees, branches of palm trees and boughs of leafy trees and willows of the brook, and you shall rejoice before the LORD your God seven days. You shall celebrate it as a feast to the LORD for seven days in the year. It is a statute forever throughout your generations; you shall celebrate it in the seventh month. You shall dwell in booths for seven days. All native Israelites shall dwell in booths, that your generations may know that I made the people of Israel dwell in booths when I brought them out of the land of Egypt: I am the LORD your God.” (Leviticus 23:34-36, 39-43; Cf. Exodus 23:16, Numbers 29:12-38 and Deuteronomy 16:13-15)

Like some other biblical festivals, Sukkot has both an agricultural and an historical meaning.  Agriculturally, it is a harvest festival, but historically it commemorates the time Israel spent in the wilderness.  Sukkot is quite significant in the Bible, where it is known simply as "the festival of the LORD" or even just "the festival."  It continued to be an important holiday throughout the 2nd Temple period and beyond.  Here are a few interesting passages on Sukkot from that time (and a little bit afterwards):

Sukkot and the Nations

The post-exilic prophet Zechariah includes Sukkot in his eschatological vision.  For Zechariah, Sukkot will one day include not only Israel but also the nations, who will make an annual pilgrimage to Jerusalem to observe the feast.  If they do not, they will experience drought (Sukkot is connected not only with harvest but also prayer for rain in the coming growing season).  The Talmud also mentions the significance of Sukkot for the nations, by identifying the 70 bulls sacrificed as representing each of the 70 nations (b.Sukkot 55b).  The Talmud also predicts that God will give the Gentiles an opportunity to prove that they are willing to obey the Torah by asking them to observe Sukkot.  However, when God sends hot weather the Gentiles will give up and kick their booths.

One of the features of the 2nd century BCE retelling of Genesis-Exodus called The Book of Jubilees is a tendency to portray the pre-Mosaic ancestors observing the Mosaic law.  So even though the Torah does not really mention the festivals until Mt. Sinai, Jubilees shows Abraham and his descendants already practicing them.  According to Jubilees, Abraham was the first person to observe Sukkot.  In the seventh month, while Sarah is pregnant with Isaac, angels visit Abraham at Beersheba as they promised (Gen 18:14).  They tell him that he will have six sons (16:16), but that Isaac would be special.  "All the descendants of his sons would become nations and be numbered with the nations.  But one of Isaac's sons would become a holy progeny and would not be numbered among the nations, for he would become the share of the Most High." (16:17-18; the Talmud also mentions Israel's distinction from the nations in connection with Sukkot)  Abraham and Sarah are quite happy about this, and celebrate Sukkot in response:

"There he built an altar for the Lord who had rescued him and who was making him so happy in the country where he resided as an alien.  He celebrated a joyful festival in this month -- for seven days -- near the altar which he had built at the well of the oath.  He constructed tents for himself and his servants during this festival.  He was the first to celebrate the festival of tabernacles on the earth." (16:20-21)

Jubilees goes on to give some details about the sacrifices Abraham offered.  Throughout the description emphasizes the joyous nature of the festival, which may explain why Jubilees decided to connect the observance with a joyous occasion in Abraham and Sarah's lives.  Throughout history the joyous nature of the holiday has been emphasized.  Jubilees also tells us  that it was Abraham who named it "the festival of the Lord" (16:27).  We're also told that "He celebrated this festival for seven days, being happy with his whole heart and all his being -- he and all those who belonged to his household.  There was no foreigner with him, nor anyone who was uncircumcised." (16:25)  Exodus 12:43-45 specifies that no foreigner or uncircumcised person can participate in the Passover, and Jubilees seems to be applying this to Sukkot as well (Kugel, Walk Through Jubilees, 104). This is very interesting to me in light of the Zechariah passage which speaks of Sukkot as a festival that will one day be observed by all the nations.  Could Jubilees be responding to or clarifying contemporary interpretations of the Zechariah passage?

According to 2nd Maccabees the festival of Hannukah was partly modeled on Sukkot:

And they celebrated it for eight days with rejoicing, in the manner of the feast of booths, remembering how not long before, during the feast of booths, they had been wandering in the mountains and caves like wild animals.  Therefore bearing ivy-wreathed wands and beautiful branches and also fronds of palm, they offered hymns of thanksgiving to him who had given success to the purifying of his own holy place. They decreed by public ordinance and vote that the whole nation of the Jews should observe these days every year. (2nd Maccabees 10:6-8)

The mention of "ivy-wreathed wands" in the 2nd Maccabees passage might suggest, to the attuned reader, a connection with the god Dionysus.  The Greek writer Plutarch actually argued that Sukkot was a Dionysiac celebration:

The time and character of the greatest, most sacred holiday of the Jews clearly befit Dionysus.  When they celebrate their so-called Fast, at the height of the vintage, they set out tables of all sorts of fruit under tents and huts plaited for the most part of vines and ivy.  They call the first of the days of the feast Tabernacles.  A few days later they celebrate another festival, this time identified with Bacchus not through obscure hints but plainly called by his name, a festival that is a sort of 'Procession of Branches' or 'Thyrsus Procession,' in which they enter the temple each carrying a thyrsus.  What they do after entering we do not know, but it is probably that the rite is a Bacchic revelry, for in fact they use little turmpets to invoke their god as do the Argives at their Dionysia.  Others of them advance playing harps; these players are called in their language Levites, either from Lysios (releaser) or, better, from Evius (God of the cry). (Plutarch, Quaestiones Convivales, 4.6.2)

John 7 tells about Jesus' pilgrimage to Jerusalem to observe Sukkot.  Some of his sayings in this chapter may be using imagery that reflect elements of Sukkot observance.  For instance, the association of Sukkot with rainfall and the water libation may give some context for this saying:

On the last day of the feast, the great day, Jesus stood up and proclaimed, “If any one thirst, let him come to me and drink.  He who believes in me, as the scripture has said, ‘Out of his heart shall flow rivers of living water.'" Now this he said about the Spirit, which those who believed in him were to receive; for as yet the Spirit had not been given, because Jesus was not yet glorified. (John 7:37-39)

In 132-135 CE Simon bar Kokhba led a revolt against the Roman empire.  We do not know as much about this revolt as we would like, but among the sparse historical evidence some letters from bar Kokhba survive.  One of them is a request for the materials needed so that his army can observe Sukkot:

"Shimon to Yehuda bar Menashe, to Qiryat Arabaya:I have sent to you two donkeys so that you shall send with them two men to Yehonatan bar Ba'ayan and to Masabala so that they shall pack/load and send them to the camp, to you, palm branches and citrons.  And you, send others from your place, who will bring you myrtle and willows.  And prepare/tithe them and send them to the camp, for the multitude/army is large.  Be well." (Schäfer, The Bar Kokhba War Reconsidered, 9)


This is just a very small sampling of ancient texts about Sukkot!  To find out more about the holiday in general you might check out "10 things you probably don't know about Sukkot" and this article on Sukkot from the Huffington Post.
Posted by James at 7:33 AM