In honor of the American holiday of Labor Day, here are just two examples of ancient labor laws from the Hebrew Bible:


Sabbath (Deuteronomy 5:12-15)
Observe the sabbath day and keep it holy, as the Lord your God commanded you. Six days you shall labor and do all your work. But the seventh day is a sabbath to theLord your God; you shall not do any work—you, or your son or your daughter, or your male or female slave, or your ox or your donkey, or any of your livestock, or the resident alien in your towns, so that your male and female slave may rest as well as you.15 Remember that you were a slave in the land of Egypt, and the Lord your God brought you out from there with a mighty hand and an outstretched arm; therefore the Lord your God commanded you to keep the sabbath day.

Many are more familiar with the sabbath rationale given in the Exodus 20 version of the ten commandments and the famous seven day creation story in Genesis 1.  But Deuteronomy gives a different reason for observing the sabbath: because the Israelites knew what it was like to be exploited laborers.  Notice that sabbath is to be observed by the whole household, including slaves and animals.

"You shall not withhold the wages of poor and needy laborers, whether other Israelites or aliens who reside in your land in one of your towns.You shall pay them their wages daily before sunset, because they are poor and their livelihood depends on them; otherwise they might cry to the Lord against you, and you would incur guilt."
Posted by James at 6:17 AM No comments:

Eerdword, the Eerdman's blog just posted something by Joy Schroeder on her book The Book of Genesis, a new volume in The Bible in Medieval Tradition series.  Schroeder has translated major excerpts from seven different medieval Christian commentators on the Book of Genesis, many (most?) of which have not been published in English translation before.

Be sure to check out her post by clicking here, and consider buying the book!  It appears to be available in Kindle edition now and paperback at the end of the month. 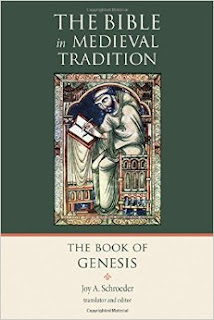 As someone who studies the interpretation of Genesis in ancient Judaism, I am very excited to take a look at this resource and get a better sense of how the book was interpreted by medieval Christians.  The history of interpretation is fascinating in its own right, but it also gives us important and often revealing insights into our own modern assumptions about text, meaning, and interpretation.
Some other works that also take us into the world of the historical interpretation of Genesis:

Inheriting Abraham: The Legacy of the Patriarch in Judaism, Christianity, and Islam, by Jon D. Levenson.

The Bible as it Was, by James Kugel.

In Potiphar's House: The Interpretive Life of Biblical Texts, by James Kugel.
Posted by James at 12:28 PM 1 comment: