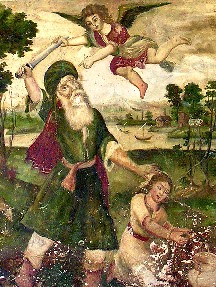 I've uploaded another Ethiopic Jubilees reading guide based on my concordance data.  This one lists all of the vocabulary for Jubilees' version of the Aqedah, the near-sacrifice of Isaac.  I haven't included any grammatical or syntactical notes on this one -- I may create some separate documents/resources with those later on.

Jubilees 17:15-18:16 offers a fascinating take on the famous story from Genesis 22, which includes a Job-esque challenge from Prince Mastema (a Satan figure) and the early Jewish tradition that Abraham underwent (and passed) a series of divine tests.  You can access the vocabulary guide here.  Also feel free to check out the previous reading guide for Jub. 11:1-10.

Happy translating!
Posted by James at 4:51 AM No comments:

Getting Wrapped up in the Story: A Molasses Slow Reading of the Text

There are a lot of ways to read a text.  Over the last two weeks I have been concording (making a concordance -- if "concording" wasn't a verb before, it is now) a portion of Ethiopic Jubilees.  This work involves going through the Ge'ez word by word, prefixed preposition and conjunction by prefixed preposition and conjunction.  While the work should probably be dull and laborious, it's actually been pretty enjoyable.  Part of the enjoyment comes from the fact that Ge'ez is fun (according to one out of one bloggers surveyed), and from the many cool little things one generally discovers when peering behind the English veil to see the original, or in this case versional language of an ancient text.  But I've also found myself enjoying the narrative more.  In particular, I've found myself more emotionally wrapped up in the story.  That's right, it turns out concording is an oddly emotional experience.

I've worked through chapters 11-20, from the beginnings of Abram's life up to the point where he starts talking about the possibility of his death (21:1).  This means I've covered a lot of narrative time (Abe is now 175 years old).  But as is characteristic of much Israelite and early Jewish narrative, that 175 years has taken very little discourse time.  A lot of time in the story world has been condensed into 10 chapters and 250ish verses.  When there's such a disparity between narrative time and discourse time we do not always have the opportunity to become emotionally wrapped up in a story and its characters.  We read about a character's birth and then, after twenty minutes of reading, we read about their death.

I've been working on a project involving Ethiopic Jubilees and thought I'd make a little of the data available for those who are learning Ge'ez.  I've put together a little reading guide for Jub. 11:1-10, that exciting bit of the book that talks about the beginnings of civilization after the flood.  It turns out that it didn't take long for humans to start killing, enslaving, and oppressing each other.  The reading guide has a list of all of the Ge'ez vocabulary for this section, as well as English glosses and the page reference for the appropriate entry in Leslau's concise lexicon.  I also included a few bullet points that point you to parts of Lambdin or Leslau that will help in translating the text.