Ethiopic Ezekiel Reading Guide: The Valley of the Dry Bones 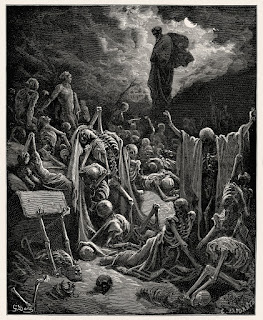 I've posted a new Ge'ez reading guide/vocabulary guide, this time for the text of Ezekiel 37:1-14 in Michael Knibb's new critical edition of Ethiopic Ezekiel.  If you try to buy it online, you'll notice the volume is pretty expensive.  Fortunately, in a stroke of luck or a moment of divine favour I stumbled across it on Amazon.com several months back when, for some reason, they were selling copies of it for $10.

Ezekiel's vision of the valley of dry bones is moving. My favourite visual interpretation comes from the St. John's Bible.

You can download the reading guide (and other guides for Jubilees and 1 Enoch) here.   Have fun!
Posted by James at 8:15 PM 12 comments:

Ge'ez (classical Ethiopic) is one of those languages that many students of early Jewish and Christian literature know is important, and would like to be able to work with to some extent, but which remains a bit inaccessible.  Formal classes in Ge'ez are rarely offered. While there are good grammars in English, German, and Italian, they don't always offer the easiest entryway into Ge'ez for the autodidact or for the classroom.

One project I have been working on is writing an introductory Ge'ez grammar which is meant to be a stepping-stone into the language and is specifically designed with students of early Jewish and Christian literature in mind. The intended audience includes those focusing on the so-called Pseudepigrapha, as well as those working on the textual criticism and textual history of "biblical" literature. It will naturally also be useful for those who are interested in learning Ge'ez in order to interact with other important Ethiopic texts. After working through the grammar readers will have a good, basic understanding of the language, and be equipped to start engaging relevant texts, tools, and resources. Those who want to go deeper with the language could then continue on to more extensive resources, like Lambdin, Dillmann, or Tropper.

A few of the features of the grammar:


If there are features that you personally would find helpful in a grammar like this, please let me know!

I'd posted before about Ge'ez (classical Ethiopic) being offered in Munich this academic year.  But back in North America this has also been an exciting year for Ge'ez:

At the University of Toronto Prof. Robert Holmstedt is teaching the language, discussed in this article here.

At the University of Washington Ge'ez is being taught by Prof. Hamza Zafer.
Posted by James at 6:20 PM 5 comments: