For my dissertation at the Ludwig-Maximilians-Universität München I am preparing a critical edition of the Ge'ez commentary materials on the Book of Daniel. A little bit about the project:
The significance of Second Temple Judaism for religious scholarship lies partly in its influence on later religious movements and traditions.  The literature, institutions, and ideas that emerged during the time of the Second Temple, both in the Persian and Greco-Roman periods, were foundational for Rabbinic Judaism, early Christianity, and Islam.  To appreciate Second Temple literature in all of its richness we must give attention not only to the texts in their earliest contexts, but also to their reception histories.  While the study of the influence and reception of Second Temple texts will naturally include the antique and medieval Hebrew, Greek, and Latin traditions, it must also include the “oriental” traditions, which have to this point not been adequately examined by modern western scholarship.

Among these traditions the classical Ethiopic corpus is quite significant, as it preserves texts like 1 Enoch and Jubilees that are not fully extant in their original languages or in any of their other versions.  These Ethiopic versions are indispensable for the study of these important Second Temple texts (fortunately, a new edition and translation of Ethiopic 1 Enoch is currently underway).  The Ethiopic tradition also contains versions of early Jewish texts for which the original language(s) manuscripts and other versions do exist, such as the Wisdom of Solomon or the Book of Daniel.  While their value as text-critical witnesses to the “original” text or earlier versions is open for debate, these versions are at the very least valuable for reception-oriented text-critical work that aims to understand and appreciate the textual development of a composition as a worthy pursuit in its own right.  In addition to versions of Second Temple texts, which can be studied from the perspective of reception history, the Ethiopic tradition also preserves interpretations of and commentaries on some of these texts.  While many of these works are in Amharic and are part of the andemta tradition, some are extant in classical Ethiopic/Ge'ez.  These are helpful for understanding the reception history of Second Temple literature in late antiquity and the medieval period.

The objective of my research is to contribute to the study of the reception of Second Temple Jewish literature in the classical Ethiopic tradition by offering a critical edition, English translation, and analysis of the Ge'ez Tergwāmē materials on the Book of Daniel, which contain both Ge'ez versions of the text of Daniel as well as commentary on the book.  Manuscripts of these materials have been known to western scholarship for some time, and the text of Daniel in one of the manuscripts was even collated by Oscar Löfgren in his critical edition of Ethiopic Daniel.  However, no one has yet published, critically edited, or translated these commentary materials.  My dissertation is an attempt to fill that lacuna.
Read more »
Posted by James at 4:53 AM

The Names of Ge'ez / Ethiopic Letters

So you've learned the 100+ forms of the Ge'ez script, but you're still wondering what to call all those letters?  If you're like me, you might find yourself using the names of Hebrew or other semitic letters, but in European scholarship they have their very own names.  I've compiled a list of these names as presented in several of the major grammars, that you can download as a PDF here.

Of course you don't need to learn 100+ names -- just the name of each consonant, and from there you can refer to its different forms by their order.  So, "that's a third order hoy" or a "sixth order gaml." [P.S. "The Sixth Order of Hoy = a great name for your next secret society].

Email ThisBlogThis!Share to TwitterShare to FacebookShare to Pinterest
Labels: Ethiopic 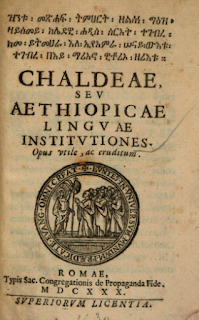