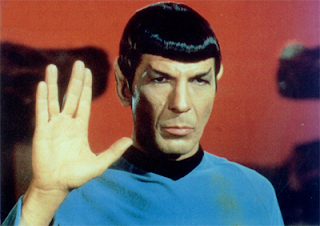 Have you ever wondered about the origins of the Vulcan salute in Star Trek?  I think it's well known to many Trekkies that Leonard Nimoy based the iconic hand gesture on a Jewish ritual he witnessed as a child.  In some streams of contemporary Judaism the descendants of the ancient priestly class offer the priestly blessing from Numbers 6:24-26:


In Numbers YHWH commands Moses to tell Aaron and his sons to bless the people of Israel with these beautiful words.  (Fun fact: the first line of the blessing has three words in the Hebrew, the second line has five words, and the third line has seven words, giving the sense of the blessing expanding as it progresses).  Numbers 6 does not prescribe any accompanying physical gestures or rituals, but as the blessing has been practiced throughout history a number of traditions have been associated with it, many of which are based on other passages in the Hebrew Bible.  One of these is the raising of the hands, a practice that the Talmud supports by referring to Leviticus 9:22 where Aaron lifts his hands when he blesses the people.  We see evidence that the priest raised his hands when blessing the nation in the 2nd Temple period as well:


"Then Simon came down and raised his hands over the whole congregation of Israelites, to pronounce the blessing of the Lord with his lips, and to glory in his name; and they bowed down in worship a second time, to receive the blessing from the Most High." (Sirach 50:20-21)

So what does any of this have to do with Spock?


When the hands are raised to give the blessing they are configured so that the two hands, palm downwards, touch at the tip of the thumbs or the thumb joint.  The thumbs are spread apart from the index fingers, and on each hand the index finger and middle finger are held together (or sometimes barely separated from each other) and separated from the ring and little fingers, which are likewise held together (or barely separated from each other).  The result?  The hands have five openings or apertures, look like the Hebrew letter shin (which some interpret as a reference to "Shaddai" or "Shalom"), and have the appearance of a double-handed Vulcan salute. 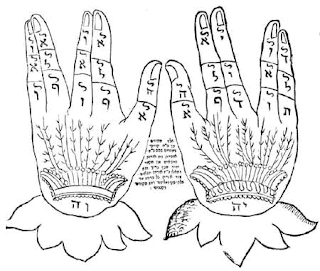 (For other images, check out this sculpture in Kansas, or some tombstones here, here, or here.)

Leonard Nimoy has written that he witnessed his father make this hand gesture as a child, and that it was his inspiration when he created the Vulcan salute.  Of course he modified it a bit, by having the palm face outward instead of downward and using a single hand rather than both hands.  The "live long and prosper" is also a bit different than the priestly blessing.  Rabbi Yonassan Gershom, author of Jewish Themes in Star Trek, talks a bit more about the Vulcan connection here.  Arthur Kurzweil also notes the connection in The Torah for Dummies.

So what is the origin of this hand gesture in the Jewish tradition?  How ancient is it?  This gesture is sometimes found on Jewish headstones and iconography (if you see the "Vulcan salute" on a headstone it probably doesn't mean that Spock is buried there), and I'd be curious to know what the earliest examples of this are (contact me if you have information on this).  We do find literary references to the gesture in both the Zohar and the Midrashim.  For a brief discussion of these sources and the hand gesture in general, check out Bircas Kohanim: The Priestly Blessing, 41.  The Midrash connects this practice with Song of Songs 2:9:

My beloved is like a gazelle
or a young stag.
Behold, there he stands
behind our wall,
gazing through the windows,
looking through the lattice. (Song of Songs 2:9)

The five gaps or apertures between the fingers has been associated with an interesting reading of the Hebrew word for "lattice" in Song of Songs 2:9.  The word is hacharakim.  The "ha" at the beginning is the Hebrew definite article ("the"), which is prefixed to Hebrew nouns.  If it stands by itself and is not prefixed to another word that Hebrew letter is the numeral 5 (it is the fifth letter of the alphabet).  So some have separated it in this verse, making it read "five openings" rather than just "the openings" or "the lattice."

Personally, I find it pretty fascinating that we have a 20th century TV show that portrays people in the 23rd century performing a hand gesture that is based on a similar hand gesture that seems to go back at least to the medieval period and is ultimately connected to a ritual performed in ancient Israel.