One of the exercises we did in the Greek class I teach is translate famous movie quotes into Greek.  It's a fun way to play around with the language and explore the different ways you can say the same thing. I thought I'd start offering some of my own fiddlings around with ancient movie quotes (AMQ) here.  Please let me know if you think there are better ways to make these translations! 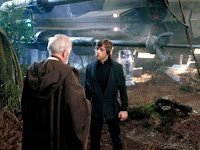 In episode IV (A New Hope) Ben (Obi-Wan) Kenobi tells Luke about his father, bragging about what a great Jedi, pilot, and friend he was, before telling Luke that a young Jedi named Darth Vader betrayed and murdered him.  We later learn (along with Luke) that this was only true "from a certain point of view."  When Luke confronts the spirit of Obi-Wan on Dagobah he complains: "You told me Vader betrayed and murdered my father!"  Here's our Ge'ez rendering:

So let's break this down a bit.  First we have a perfect verb in the 2nd masculine singular (ነገርከ/nagarka) to which we've attached a 1st person singular object suffix (ኒ/ni).  We've packed "You told me . . ." into one handy little word.  We've then used the conjunction (ከመ/kama) to introduce the indirect speech (Dillman, 538).  For the verb "betray" we had a few different options, since Leslau lists three different verbs with this meaning: ከድዐ, (አ)ግብአ and ጠለመ.  I went with the second one just because that's the word used for Judas' betrayal in passages like Mark 3:19 and 14:10.  Then we have our conjunction ወ/wa and our second verb (ቀተለ/qatala) in the perfect 3rd person masculine singular.  I chose to use verb-subject-object word order, so we have Vader (ወድር/wader) followed by the accusative form of "father" with the 1st person singular pronominal suffix (See Lambdin, 41 where we learn that አብ looks like አቡ- /'abu- when it takes a pronominal suffix, unless it is in the accusative in which case it looks like አባ- /'abā-).

Some things I was curious about:
Would you translate this any differently?  And more importantly, was Luke right to be a little peeved with Obi-Wan?
Posted by James at 6:15 PM