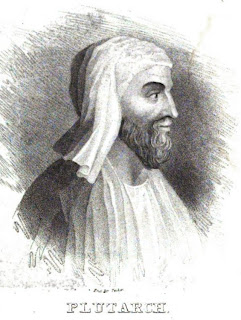 "The ship on which Theseus sailed with the youths and returned in safety, the thirty-oared galley, was preserved by the Athenians down to the time of Demetrius Phalereus. They took away the old timbers from time to time, and put new and sound ones in their places, so that the vessel became a standing illustration for the philosophers in the mooted question of growth, some declaring that it remained the same, others that it was not the same vessel." (Plutarch, Theseus, 23.1)

As Thomas observes in his video, this raises questions about the persistence of identity, a question which he explores by looking at Star Trek's transporter technology as well as the death and resurrection of Spock.  Such questions are interesting within the spans of our mortal lifetimes, as we try to understand what it means to be "me" as "I" grow, develop, and constantly cash in old cells for new ones.  They also stand at the heart of reflections on the possibility and nature of the afterlife.  If an afterlife consists of a disembodied existence, to what extent is that disembodied stuff still you?  If the resurrection of the dead is your afterlife of choice, what does that actually look like and how does your identity persist?


When I was in high school a professor of bio-ethics came to speak at my church, and my sister and I tried to ask him about such things, including the question: when the Rapture comes (yes, I once believed in a Rapture), what happens to organs you donated when you died?  Does God pluck that kidney you graciously gave right out of the donee's side in order to reconstitute your body?  He did not seem to think it was a question worth reflecting on, telling us that "God will figure it out."  I am glad that since ancient times there have been people who have not been content to say "God will figure it out."  And it's nice to see Trekkie-philosophers continuing to ask these old questions in new and interesting contexts.

Have you encountered any other interesting resources that bring ancient philosophy/literature and modern science-fiction together?

Cohen, S. Marc.  "Identity, Persistence, and the Ship of Theseus."

Hicks, John. Death and Eternal Life.  (esp. his chapter, "The Resurrection of the Person.")

There is also a recent Indian movie called "Ship of Theseus."
Posted by James at 4:56 AM