If a priest breaks the law does that make her a "white collar" criminal?  (Sorry, if you're looking for good jokes a blog on the ancient world is probably not the place you're going find them) 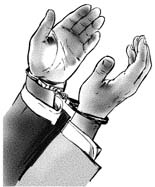 I recently prepared a sermon on Amos 8:1-12, a passage that includes the Hebrew prophet Amos' vision of the summer fruit basket (see our discussion of that here) and one of his many condemnations of the rich oppressing the poor.  When we read a text like that from the perspective of the ancient historian, we might wonder what exactly the wealthy were doing in Amos' 8th century context to oppress the poor.  What did "trampling" on them look like?  What was the nature of ancient white collar crimes?


Before answering that question we should remember that the historian needs to be careful about taking an ancient writer at their word.  Were things really as bad as Amos makes them out to be?  Or was he just a nostalgic agriculturalist who did not appreciate some of the social changes brought about by things like urbanization?  While people of faith might want to take one of their ancient prophets at his word, the historian does not have that luxury.  That's just something to keep in mind if you dig into the socio-economic situation in 8th century BCE Israel.  But let's also be realistic: we can probably expect to find some form of economic injustice and exploitation in any age we study.

So what was going on economically in Amos' day?  That question, like all historical inquiry, requires a bit of detective work.  Scholars who reconstruct the prophet's social world use three main sources:

(1) the archaeological record.  While Indiana Jones was off hunting for magical artifacts and socializing with women, his archaeological colleagues were engaged in the hard work of digging up the remains of ancient societies.  Archaeology can help us understand the economic situation in ancient Israel.  What kinds of houses do we find?  What size are they?  Are there some that are really big and fancy, while others are quite small and unimpressive (indicating economic disparity)?  Do we find grain storage bins where agricultural surplus could be stored?  If so, how big are they and where are they found?

(2) the literary evidence.  What can we learn from texts like Amos and Hosea?  From non-Israelite written records?  It's worth noting that the relationship between the literary evidence and the archaeological record has been a point of contention and controversy in the study of ancient Israel.  Do we assume that the Bible is historically reliable and use it to interpret the archaeological evidence?  Do we set the Bible aside, focus on the archaeological remains, and use them to then tell us whether the Bible is historically accurate or not?  The way this dance between textual remains and 'physical' remains has been handled has sometimes made "biblical" archaeology suspect in the eyes of the mainstream archaeological establishment.

(3) comparative anthropology and economics.  Ancient historians sometimes use comparative data in their work.  If we can identify what kind of society 8th century Israel was, then we can look at similar societies that we have more data on.  How do these societies work?  What kinds of patterns do we find?  Such patterns help fill in the blanks in the historical record and help us create a plausible historical narrative.

I won't spoil the fun by talking in detail about what scholars have found out about 8th century Israel through these three sources/approaches.  You can satisfy your thirst for detail by exploring the titles below.  I'll just leave you with a few fun key words and phrases: latifundialization; militarization; taxes; usury, debt, and foreclosure; grain bins; crop specialization; urbanization; international trade; tolls; tampering with the scale in the grocery store.

If you want to dig in some more, check out:

Holladay, John S. Jr.  "The Kingdoms of Israel and Judah: Political and Economic Centralization in the Iron IIA-B." Pages 368-98 in The Archaeology of Society in the Holy Land.  Edited by Thomas E. Levy.  London: Leicester University Press, 1998.
Posted by James at 9:00 AM